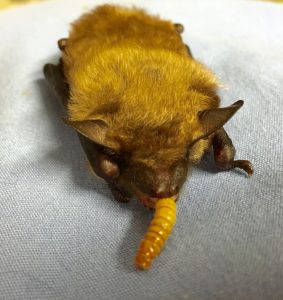 Acadia Wildlife Center specializes in the care of bats.  We receive bat patients from all over Maine, including very young babies. We advise homeowners on bat related situations.  Bats are a rabies vector species so always wear gloves when handling them including the babies. Children should never pick up a bat, but can put a box over an injured one to hold it in place while they get an adult for help.  Pictures on this page and elsewhere may show hands without gloves, but these are handlers who have their pre-exposure rabies shots, get their titers checked every six months, and can handle animals without getting bitten. Bats are very small and it is easier for rehabilitators to handle them without gloves. 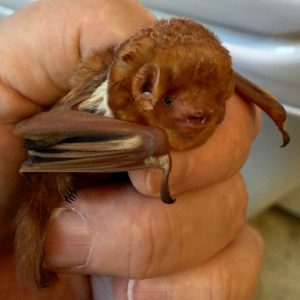 AWC receives bats year-round. In spring, bats of several species are waking up from hibernation, and get injured by cats, door hinges, glue-traps, and other human related incidents. Bats rarely hurt humans, but humans hurt bats on a daily basis. 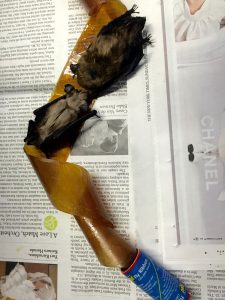 By June female bats have had their young.  The tiny babies cling to their mothers, nursing as the mothers are hunting. Sometimes they lose their grip and fall. Later infants become too heavy for the mothers to carry and are left at the roost. They often fall from their nursery and need help.  At all stages of infancy they are fragile and peep loudly for their mothers. If she does not find them quickly, they need speedy transport to our facility. 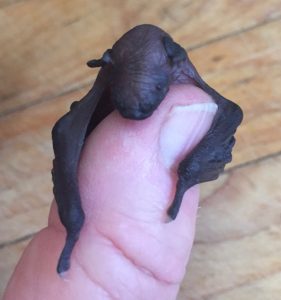 Later in August, juveniles fly for the first time, and again, some of them fall, sustain injury or become dehydrated. They can be put safely back up near the nursery entrance, but only if they appear very lively.

In winter Big Brown Bats hibernate in our attics and barns. Other species travel to caves or shale slopes to hibernate, or migrate south depending on the species.  If wintering bats are woken from hibernation and fly around, they do not have the fat reserves to go back into hibernation and survive until spring.  Therefore we recommend that any adult bat flying in your house in winter be captured safely and brought to our clinic.  Here we keep them awake for the winter and release in the spring. 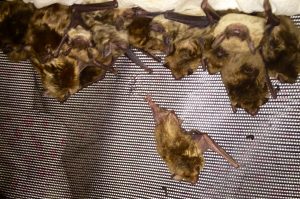 Bats like your attics and barns.  They are safe places for them to have their young and to hibernate.  But they don’t like your kitchens or bathrooms and end up there by mistake. A caulking gun can be your best friend in an old house, closing tiny cracks around walls and chimneys.  Help bats to escape your living space during summer by opening a window at night. They can also be gently covered with a glass or cloth, gathered up, and put outside, up high in a protected place. They cannot fly from the ground but must be able to glide down and then loop back up to gain height. When they dive in a room they really are not trying to attack you. They are afraid of you, but are trying to get enough lift to fly away. Do not try and catch a bat that is flying.  Just close the room up and wait for it to land and go to sleep. 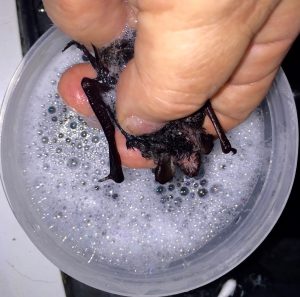 ALWAYS USE GLOVES! Only one in 10,000 bats contracts rabies, but it is best to be safe.  Like any wild animal they will be frightened and try to bite.  Any bat that comes into rehab with a rescuer that has not worn gloves, must be put down and tested for rabies.  Please protect the bat and yourself.

A bat on the ground not moving or otherwise appearing injured should be brought to the AWC clinic. A bat patient should be put in a small box with a tight fitting lid, barely any air holes, and a cloth for it to hide in. Tape down the edges of the box. A bat can fit through an eighth inch gap. Do not attempt to give food or water, but heat is very useful.  Bats prefer to be at 95 degrees, especially babies, and you can save lives by providing an external heat source to keep them cozy.  A caution: hand warmers can overdue it and overheat an animal that may try to climb onto it. We can be called throughout these processes to give advice and help make decisions. 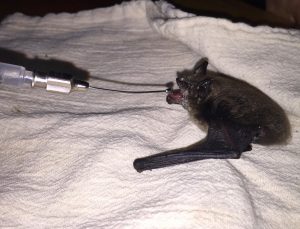 Many people ask, “Why should we care about bats?” “ I’m afraid of bats” “They are ugly like flying mice.” Bats have nothing they need to prove to any of us, living out their long lives quietly and gently, not bothering anyone.  I find them endlessly fascinating and beautiful.  More closely related to primates than rodents, they can do everything I can do, and so many things I can’t.  But for those who don’t yet love them there is probably no group of mammals more useful to humans on the planet.

The insectivorous bats can eat 1000 bugs an hour. The small bats eat mosquitoes and other small insects that carry human diseases, and make backyard barbeques so annoying. Big Brown Bats can eat thousands of beetles that attack our agricultural crops and devastate our forests. In North America alone they save us billions of dollars in crop and forest damage.

The bats of the southern climates are often fruit eating species. These wonderful animals pollinate hundreds of species of fruits and trees that we eat every day, and disperse rainforest seeds that ensure the future of the most important biome in the world. Often they are the sole pollinator or disperser. There is barely a product that we use every day that does not owe its existence to fruit eating bat species. Bats make up a quarter of all the mammal species on earth, and many of them are in trouble. 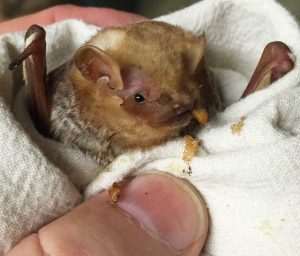 In the last year, three of our eight species of local bats (Little Brown, long-eared Bat, and Small Footed Bat) have been put on the endangered species list. The Little Brown Bat population has plummeted 97%, the Big Brown Bats are down 40%. A European cave fungus, transported to a cave in New York State, called the White Nose Fungus, is killing our bats.  It has spread from that one cave, to the entire eastern seaboard of the U.S. and Canada. It has now jumped to the west coast.  In a decade we have lost most of our bats. Bats, for their size, are among the slowest reproducing mammals on earth, having one or two pups per year. Many species of bats may go extinct, right under our noses.

Humans usually do not like, or support bats. This is surprising considering how important they are to us and it needs to change.  The scientists will have to come up with the specifics of a cure. The public’s job is to support the efforts of the scientists, ( large research-orienated bat organizations like Bat World Sanctuary and Bat Conservation International) and the bat rehabilitators. Acadia Wildlife Center will take any and all bat patients.  This year we built, with the publics support, the first bat flyway in Maine. We depend on the public to bring us those patients. Any problems that you as a homeowner have with bats can be discussed, and solutions found, without hurting these animals.  Please call us.